One of the most common applications in fire rated bulkheads and decks are cable transits to accommodate electrical or data communications cables. The IMO FTP 2010 Edition states, “…divisions may have to be provided with apertures to allow them to be penetrated by cables…” It further states that, “a cable transit consists of a metal frame, box or coaming, a sealant system or material, and the cables…” Cabling needs on modern vessels are ever expanding. So it begs the question, “How much cable is too much?”

Cable transit Type Approvals will state the maximum cable fill percentage. Exceeding the listed fill percentage will displace firestopping materials, and that can create an unsafe condition since it may no longer resist the passage of flames and hot gases and thereby maintain the fire rating of the division. When evaluating a cable transit application onboard a vessel, it is important to note that there is a difference between visual cable fill percentage and the calculated cable fill percentage. What may appear to be visually full, will actually be substantially less when calculated because of the interstitial spacing between stacked cables. Cable transit Type Approvals list actual cable fill in terms of the aggregate cross-sectional area the cable occupy as a percentage of the aggregate cross-sectional area of the transit frame, sleeve, or coaming itself. 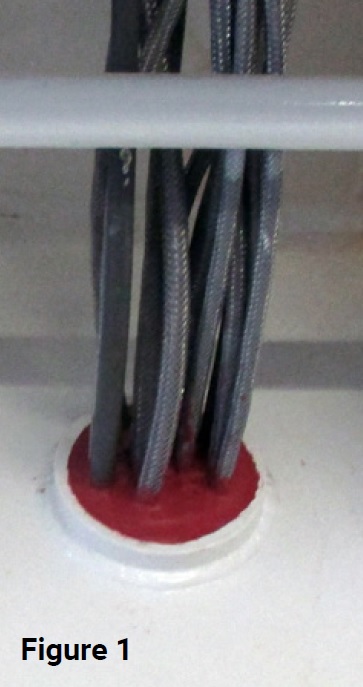 The image shown in Figure 1 shows a cable transit in a bulkhead that visually appears to be half full of cables. But is it really? Let us review the application. The diameter of the transit is 100 mm (4”). There are eleven (11) 12.7 mm (0.5”) diameter cables.

First calculate the area of the transit:

Our quick calculation shows that the aggregate cross-sectional area of cables is 18%, not the 50% visual fill that we appear to see in the photo. Many Type Approvals for sealant based transit system solutions have up to a 40% calculated fill percentage. So in theory, using the same 13 mm (0.5”) electrical cables, the 100mm (4”) transit could actually hold twenty-five (25) and still fall within the parameters of the Type Approval (Ex. 126.7 sq. mm x 25 = 3168 sq. mm of cables/7854 sq. mm transit = 0.40 or 40%). As you could quite imagine, as 40% calculated fill is approached, the transit sleeve may actually appear to be closer to 100% visually filled.

It is sometimes difficult to understand the effect that the interstitial space between the individual cables can have on the appearance of the transit sleeve being almost half full. But here is another quick visual exercise. The illustration in Figure 2 shows a graphical representation of the photograph in Figure 1. We can see the space between the cables and between the cables and the periphery of the opening. Cables are round and will not nest particularly tight together. However, if we re-imagine the transit sleeve as a square having the same area as the circular transit sleeve and that each cable is now square shaped instead of round, we can see how the cables only occupy a small portion of the overall opening in Figure 3. The dotted lines represent the four quadrants of the transit sleeve, and our neatly nested cables do not even fill an entire quadrant.

For watertight applications, cable spacing is vital to allow for the sealant to be applied as a continuous membrane to provide the sealing function. Under such conditions, dependent upon the transit size, it may be difficult to significantly increase cable load. For non-watertight conditions, some Type Approvals, such as STI Marine’s MPACT® System, the cables may be grouped into bundles. Additionally, a new type of cable transit, STI Marine’s EZ-Path® Marine Cable Transit is listed by some Type Approvals in terms of visual fill (from 0% to 100% visual fill). The EZ-Path® Cable Transit (Figure 4) is a self-sealing transit device. It cannot be overwhelmed and if the cables fit, the device will provide the fire rating. EZ-Path® Cable Transits are quickly becoming a popular method to run data communication cables in non-watertight divisions.

We hope you enjoyed our quick primer on cable transit fill percentages. For more information on these and other STI Marine products and systems, please visit our website www-news.stimarine.com or email us at techserv@stimarine.com.